I spent part of yesterday morning hanging my Trailings exhibit at our local library. I had a few people who had asked for updates on my project (a result of asking for public involvement back in November...see this post for more info). I let them know I would be at the library, but I finished so quickly that I missed a couple of them who dropped by to see me in action. Oops.

I had measured the space ahead of time, and had made a hanging plan of the order I wanted the images, so it was all smooth sailing to hang them. Planning ahead makes the job much easier. One thing I changed on the fly...I had planned to hang everything at the same height. I decided once I started hanging that...1. it would be very, very difficult to get them all at the same height using their wire hanging system...and 2. it would be much more visually interesting to have the images staggered. That decision made the hanging job so much easier!

It's difficult to see in the photo, but there are a couple of things sitting on the shelves which are part of the display. I'll talk about them more in a later post....a comment book, and a couple of copies of a project guide I published that includes the images from the exhibit, as well as some details about the project. 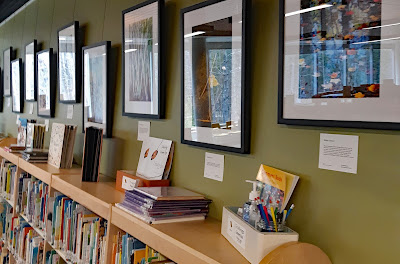