I have been carrying a camera around for almost fifty years. I know. How can I be that old?

I was quite happy with my photography. I joined a photo club as a way to get to know some people after we moved half way across the country. I met some very nice people, and I learned quickly that I didn't know much about the technical aspects of photography.

Truth be told, I am still not terribly interested in the technical side of things. I learned the "rules"...and then followed them faithfully for a while. A couple of "experts" suggested that sunrises and sunsets were unworthy of a serious photographer, and for a while I listened to them.

But wait. Why not try to capture a fleeting moment of natural beauty? I think sometimes the "experts" forget about the joy in simple things.

I live in a busy little town, on a street with very little charm. But every morning I stand at my kitchen window and look up the street. Every morning it's different and sometimes if you don't look at just the right moment, you'll miss something spectacular.

I've been taking a series of these images since the beginning of the year....through the kitchen window with my phone. And these photos make me just as happy as the most artistic image I've been able to make.  Honestly, the simple beauty of a sunrise is a gift...and a beautiful way to start the day.

Quite often I write about creating images, and usually (for me) that involves what some people refer to as photo collage, photo manipulation, or photographic art. In a nutshell, taking a photograph and changing it so much that the original image has been lost.

I do admit that I love creating something new using my photography as the starting point.

However...and this may surprise some people...I also enjoy straight photography...finding something interesting and capturing it. My favourite kind of image is something mundane, or simple, that a lot of people just wouldn't "see".

I found this one while waiting in the car yesterday. My husband and I had appointments for hair cuts, but due to COVID-19, we are only allowed in one at a time. Usually I read while I'm waiting somewhere. Yesterday I just sat and looked around. I saw something reflected in the passenger side mirror of the car and pulled out my phone. Click. Then I looked in my own side mirror and saw something I liked even more. You can see that one at the top of this post.

I love the organic branches of the tree contrasted with the straight lines of the wires, and dissected by the lines of the car window. Love.

And I love the fact that I am so easily amused. Who would have guessed that I would spend time taking photos while sitting behind the steering wheel of a car? I don't think I'll ever run out of things to be captivated by!

a thank you on International Women's Day

I received this lovely email this morning from PhotoED Magazine....how wonderful to be part of this outstanding group of women photographers!

Where inspiration can take you

I never have trouble finding inspiration for my photography since I find the most mundane things interesting and challenging to photograph...dirty dishes, and light patterns on the walls and ceiling being a couple of examples. However, I do enjoy being "challenged" in other ways and Inspiration Collaboration is another tool in my inspiration toolbox.

February's inspiration image supplied by Helen was Pink Rose Trio. Roses are non-existent in Nova Scotia until sometime around June so I considered my options. I could create a new image by re-working some files from my photographic library, or I could shoot something new. I decided to buy some pink tulips at our grocery store...it's the time of year that local hot house tulips arrive. The only problem was...they didn't have pink! Well...in my mind, it just had to be pink in answer to Helen's painting. So I waited...and waited. Finally, pink tulips arrived in the store at the end of February and I got to play with my camera. Helen's painting was created with a palette knife and showed lots of texture.

I started with this:

and my end result was this: 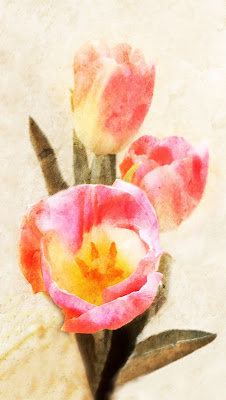 I wanted my tulips to echo Helen's roses, so I made a lot of changes to the arrangement in post processing. I flipped the image, I straightened the background tulip at the top of the photo, I moved leaves, I added a couple of textured layers. I cropped the image to be the same aspect ratio as Helen's painting, which required more moving and extending the bottom to create longer stems. It was a lot of playing on the computer, which most photographers would scoff at. But I find it sooooo relaxing and just love recreating photo image files....it's my way of painting.

But my story doesn't end here. I got to enjoy the tulips in my living room for a while...such a nice cheerful spot of spring during the long, never ending days of winter. And....then the tulips started to decay. And...then I got to play some more with my camera.

I didn't take quite as many photos as it looks like...half, in fact...there are duplicates of each image since one is a jpg format, and the other is a RAW file. RAW files contain a lot more information and are therefore better to work with when a lot of manipulation is being done. These photos were taken over two days, and four locations/different times of day. All but the last section were done with a white board in the background...which I found interesting because some of these backgrounds definitely look blue.

I can take a quick glance to see that my favourites are all minimalistic with a white or pale background. I have been working with some of the images and love the tattered, decayed look....much more interesting to me than beautiful flowers. I wonder what that says about my mind?

I'll be playing with these files for a while, but in the meantime here is Pink Tulip Trio - Part 2 (a "real" photograph with a few slight edits):

And...a good news story from a previous Inspiration Collaboration creation... I created Blueberry Love in January in response to Helen's Blueberry Muffin inspiration in January, and it sold at an exhibit called Palate, held at Round Hill Studio in Annapolis Royal.


I posted an update about my Trailings exhibit preparations at the end of January, and things were going wrong. Challenges continued through early February, but things have finally turned around and are back on the right track.

First is my good news/bad news story. I was scheduled to hang my exhibit on February 23rd, with an opening date of the 24th. On January 28th, I met with the organizer who told me they were undergoing unexpected renovations to the museum. I had been scheduled to hang the exhibit in the main exhibit area, and the revised section available was less than half the size and...how shall I put this?...looked like a make shift corridor. I asked for some time to think about it overnight, and let her know the next day that I would prefer to wait until they finished their renovations. I guess that didn't go over well, as I was told I was welcome to apply again for exhibit space at a later date. I don't think I'll be applying again (I'm wondering why that would be necessary, as I had already been accepted?)  I still have space at the local library running from April 1st through May 31st.

I had mentioned in the aforementioned previous posting that my frame order had arrived, but the frames were poor quality and unusable. I received a replacement order in mid February, and unfortunately encountered the same problems. The company was very good to work with, and a full credit was received for the frames (just the frames, I was still able to use the other supplies from the order...glass, mats, backing, hanging wire). So here's where the good news comes in from the canceled exhibit....I had more time to figure out how to solve my frame problem since I didn't have an exhibit opening on February 24th. Every cloud has a silver lining.

I did find a local frame maker who made the frames for me. It cost twice as much, but I have received them and they are beautifully made. Yay!  Most of my framing is now complete, with only two of fifteen left to frame. Another Yay!

The reprint of my exhibit guide arrived one week ago. I'm very happy with them! An exhibit guide is not a necessity now that I'm only showing at the library, but I'll figure out what to do with them. It was a great experience to put them together....I'll likely post about exhibit guides sometime soon.

Under advisement from a couple of experienced exhibitors, and due to lack of space at the library, I have decided to only show my photography and to leave out the story cloths (quilts) I worked on. They are part of the exhibit guide, so that will be enough for now.

I don't think I mentioned before that I created a comment book for the exhibit. In a blog post from December, I talked about getting the public involved. I have included their photographs and comments into this comment book, and there is lots of room left for anyone who sees the exhibit to leave their comments. Is there a need to have a custom made comment book? No, but I'm happy I created one!

Another good news story... four of the final images for this exhibit will be published in an upcoming issue of On Landscape magazine, a UK based online magazine.  The quality of photography they publish is top notch, and I am thrilled about this!

Despite some challenges in February, things have done a turnabout and are looking up. It's all sunshine and roses at the moment.