I've talked now and then about generating ideas and how I get inspired. In January 2020, together with artist Helen Eaton, I created a group called Inspiration Collaboration. In a nutshell, we provide inspiration images at the first of every month and anyone interested creates any form of art using those images as their inspiration.

This month, Helen's image was a blueberry muffin. I was stumped for a while. I mean... as a photographer... where do I go with this idea?

I thought about going abstract...with something blue dotted around the image. I have glass blobs that I used when I created stained glass window art. Maybe I could set them up somehow and photograph them?

I thought about baking some muffins and photographing them, but that seemed a little too pedestrian and not "inspired".

I thought about finding another subject that was dotted with blue.

I thought about blueberries and our mutual love for them.

Then I thought about these: 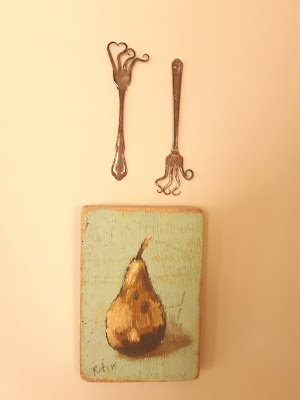 About ten years ago, when I was creating window art, I had an idea to make a "kitchen window" using stained glass mixed with common kitchen items. I contacted an artist on etsy who worked with old flatware (I am embarrassed to say I have forgotten her name!) and asked her if I could order "flattened" forks. She sent me two forks and didn't charge me!  I contacted her a couple of times and wanted to pay her, but she refused. I never did create my kitchen window, but I use the flattened forks as wall art in my kitchen (and I try not to feel guilty that they are unpaid for!)So...I have a fork with a heart and I have frozen blueberries. The light in the house was good (the sun was finally shining after one week of grey skies) and it was a good day for an indoor photo shoot.

When creating a still life, typically I have a general idea when I start and then I change things as I go. Pressing the camera shutter is part of my process. For some reason, I can't "see" the image without pressing my finger down...lol....I can't just look at it "live" and decide...I need to look through the frame of the camera.

I started with having the fork and a blueberry on a cutting board (the wood tones of the board a nod to the colour of Helen's muffin) but quickly decided that it was too busy for me. I put them on a white piece of paper...then I added a second blueberry. (aside note - most people would probably photograph a plate or bowl full of blueberries but I wanted a minimalist look!) I added a third blueberry. Then I moved a blueberry to the centre of the heart on the fork. Yay! That was the look I wanted. Then it was just a question of whether to photograph the whole fork, or just part of it.

Another view of the final result:

I switched to a portrait orientation...I like how the middle blueberry looks like it's rolling down the wall.

Although this is a photograph (not manipulated other than colour saturation and sharpening, it feels like "art" to me. And that's as good as it gets for my personal satisfaction!

Updated March 2021 to add: This piece was sold in an exhibit called Palate at Round Hill Studio in Annapolis Royal.