Yesterday we had a major snow fall. The unofficial estimate from our own yard is 15 inches. I still think in inches despite Canada switching to the metric system in the 1970's. Charlie was loving it yesterday at the beginning of the snowfall. Today, not so much. It's too deep for our dogs to get around to do their business, so I had to shovel out pathways for them.
Riley loves to be out walking, but is not as joyous about bounding around in the backyard.
For years, I have thought about going out with my camera during a snow storm, but I have never done it. Until yesterday. I was out walking on the trails for almost two hours through snow that was almost up to my knees. Thankfully,i most places there had been one person out before me to break the trail. I. LOVED. IT. It was such a joy to go out. I saw one dog walker, one person shoveling, and a couple of brave souls driving. It was so quiet, it seemed unreal.

The first photo is actually from our backyard, looking into the forest behind us. 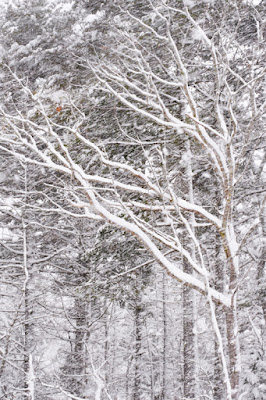 This is one of the streets that is on one of my common walking routes. This road runs between two trails so I am often on the street walking one way or the other. 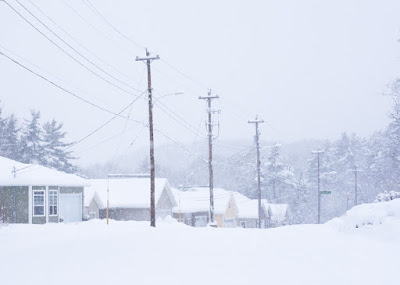 For this photo, I broke new ground and slogged through a field of knee high snow. I had a fixed lens on my camera so I had to do the physical walking to capture the full height of the trees. I was wishing for my zoom lens at that point, but I'm trying to train myself not to be dependent on a lens. 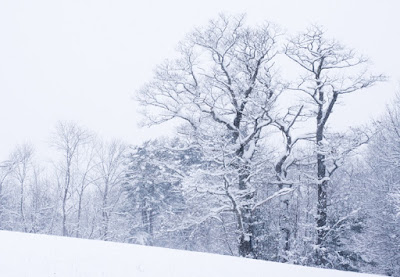 I never tire of this tunnel like view down the trail, and have photographed it in many seasons. 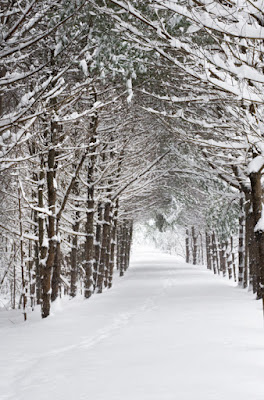 I climbed down a hill for this photo. I was intrigued by the old farm fence and took lots of abstract type photos of just the fence and the snow, none of which I have processed yet. I'm not sure anyone else would think they are interesting. 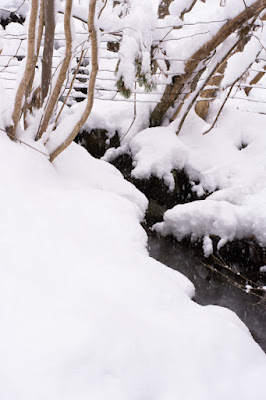 This last photo was a phone camera snap. I had put my camera away but grabbed my phone when I saw this car slip sliding up the road. This photo shows my sense of humour....the pedestrian walk sign with the car sideways on the road in the background. 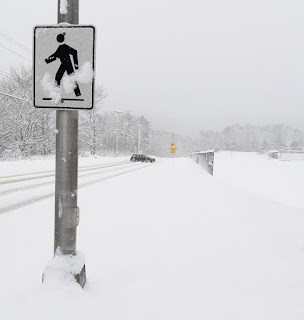