We all have our little obsessions. My current obsession with photography is playing with photos and combinations, namely feathers and birds. I don't think I have it quite right yet, but the root of my idea is to create images that use feathers to represent trees. Here's what I have so far (keep in mind that I am just learning how to combine multiple photos into one image). 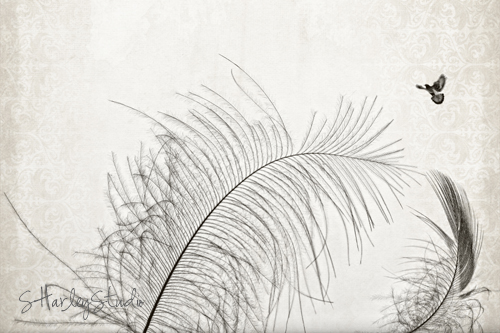 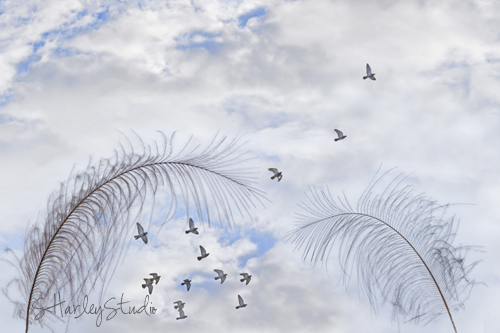 I'm trying to create a feeling of release and/or freedom. Any thoughts?
at February 17, 2017 3 comments:

Anticipation - It's Worth The Wait (snowy owls)

If you are a certain age, you may remember the ketchup commercials from the 1970’s that play the song "Anticipation" in the background. An announcer ends the commercials with the words "the taste that’s worth the wait".
I don’t remember what I did last week, but I do remember commercials from forty years ago. I wonder what that says about me?

In any case, it’s true. Some things are worth the wait.

When I was very young, maybe 10 or 11, I was anxiously waiting for my birthday to arrive. I decided to sneak around the house to try to find my presents. I was successful, and found a small stash of unwrapped gifts under a bed in a spare room. I immediately felt guilty about snooping, but that wasn’t the worst part. My birthday arrived and I had no surprises, I knew everything ahead of time. That was the worst birthday I ever had and I haven’t tried to sneak a peak to this day.

One year, my yet to be husband wanted me to shake my wrapped Christmas present and guess what it was. The memory of my childhood birthday was still vivid after all those years, and I refused to play the guessing game. But he wore me down, and soon had me shaking the box and speculate. Well, I guessed golfing shoes and he said I was way off base. Relieved, because I wasn’t a golfer by any means, I said that was good because the last thing I wanted was a pair of golf shoes.

You can see where this is going, right? You guessed it, on Christmas morning I unwrapped the box and found a pair of golf shoes. I have to admit that they did come in handy the couple of times that I golfed. I finally donated them to a golf club to use for young golfers who couldn’t afford their own equipment, so some good did come out of that gift.

A child’s anticipation of Christmas. Looking forward to a long awaited vacation. The thought of a decadent dessert after weeks of dieting. Winter imaginings of gardening in the spring. There are countless things where the anticipation is worth the wait.

I talked to a photographer during an exhibit in Lunenburg a few years back. He told me that it took him years to create the image that was displayed. I scoffed at the idea at the time, but now I understand that it actually can take years to capture an image that you have imagined. Waiting for the right conditions and circumstances can take a while if you are setting up a particular shot.
Several years ago Nova Scotia was visited by an uncommon number of snowy owls. In January 2014, there was what biologists call an "irruption year" for the snowy owl in Nova Scotia. It seemed that snowy owls were extending their territory to the south during our winter months, and we were benefiting from increased sightings. And photographers were benefiting as well. Unlike our local owl populations that are nocturnal, snowy owls hunt during the day.

Baccaro Point is one of the local spots for snowy owl sightings in the winter, and we have been traveling down there for several years trying to find one. Every year unsuccessful, I viewed the online postings of snowy owl photos with envy. Even if you are a non-birder, these beautiful large white owls are something to see.

This year, on the third week of January, we tried again. Traveling a couple of hours in the car is always good for listening to music and talking about things we wouldn’t take the time to discuss while sitting at home and the time passes quickly. After a lunch in Clyde River, we continued on to the lighthouse at Baccaro Point.

We hadn’t even come to a complete stop when my husband spotted an owl sitting on a rock by the shore. I stared at it in disbelief. Three years of searching, and now one was sitting in plain sight! I jumped out of the car and started unpacking my camera, but only managed to snatch a few quick photos as it flew off before I could set up my equipment. A man in a truck stopped and told us that this owl was different than one he had seen in the same location a few days earlier.

Spirits soaring, I walked in the direction the owl had flown. I decided that nature photography is a two person sport, as my husband and his binoculars seemed to become the official owl spotter on our team. The second owl we found was sitting on the radar station, just under the "ball" at the top of the tower. Pure white, which I later found out meant that it was a male, he was content to sit for quite some time. He may have first appeared to be lethargic, but the constant moving his head from side to side revealed he was actually quite actively watching what was going on in his surroundings.
I thought they were larger than bald eagles, but when I got home I did a little research and discovered that snowy owls are only about half the weight of the average bald eagle, and their wing span is approximately two and a half feet shorter.

Not too many people would be thrilled by spending three hours trudging back and forth across the barrens in freezing temperatures while lugging heavy equipment, but it was truly a magical experience for me, and a day that far surpassed my anticipation. It really was worth the wait, and something good to focus on.